With Cruz Up, Rubio Down, Where Does That Leave Donald Trump? – New York Times

There was a big shift in the Republican race over the last few days: Ted Cruz surged, almost entirely at Marco Rubio’s expense.

The Cruz surge was the clearest sign yet that Donald Trump might indeed be at a disadvantage in a one-on-one race. Viewed that way, Saturday was a bad night for Mr. Trump. Not only did the primaries and caucuses that day suggest he could lose if the field dwindled to one opponent, but the results also probably made a one-on-one race more likely by elevating Mr. Cruz at Mr. Rubio’s expense.

But not all is gloomy for Mr. Trump. The results made it likelier that he would face a candidate, Mr. Cruz, with serious limitations in the blue states that dominate the second half of the primary season. Mr. Cruz still seems to lack the potential for broader appeal that Mr. Rubio, despite his struggles, had shown signs of having.

The weekend’s results also made it more likely that Mr. Trump would claim Florida’s 99 delegates, potentially the biggest delegate prize of the primary season.

Mr. Trump didn’t fare much worse than expected. But Mr. Cruz, by consolidating conservative voters, nearly overtook him in Louisiana and Kentucky, states that should have been two of Mr. Trump’s strongest. Mr. Cruz won Maine, another state where Mr. Trump was favored, and he won Kansas in a landslide.

Mr. Cruz’s gains appeared to come almost entirely at the expense of Mr. Rubio. The four contests all now count among his six worst of the season. Mr. Rubio was a lot closer to John Kasich than to Mr. Cruz.

This was a real shift — not some weird product of the geography of the states. Mr. Rubio fared far worse than one would have expected based on what happened on Super Tuesday, while Mr. Cruz did much better by an almost equal amount.

The shift is perhaps clearest in the early vote data from Louisiana. Citizens in that state were allowed to vote early, an option that ended on Feb. 27. That early vote looked a lot like the Super Tuesday vote, with Mr. Rubio earning 20 percent and Mr. Cruz earning 23 percent.

Some of the change between early voting and Election Day could have been caused by differences in the compositions of the two voting blocs. But it’s more likely that it reflects a broader shift — especially given the results elsewhere.

Mr. Trump, it should be noted, did fare a bit worse in the Election Day vote — with 41 percent — than he did in the early vote, when he was at nearly 47 percent. That six-point gap isn’t especially large; I wouldn’t have made anything of it in a different context. It could easily be explained by demographic differences or the tendency for his supporters to decide early (and perhaps vote early) rather than by the huge difference in Mr. Cruz’s support. Mr. Trump also finished very near our Super Tuesday-based projections, which offers additional reason to think that he didn’t fare particularly poorly on Election Day.

Looking back, the debate on Thursday seems like the best explanation for the abrupt shift toward Mr. Cruz among conservative voters. As my colleague Justin Wolfers and others noted, Google search data showed Mr. Rubio’s advantage over Mr. Kasich and Mr. Cruz slipping after the debate. The data has often been an indicator of shifts in the Republican race this year.

Of course, Mr. Rubio, who won in Puerto Rico on Sunday night, could surge back as quickly as he collapsed. But the decline in Mr. Rubio’s standing could not have come at a worse time, with the must-win, winner-take-all Florida primary coming up on March 15.

The Bad News for Trump

The results Saturday suggested that Mr. Trump might not benefit from such a divided field for too much longer, if one of two things happens: Either Mr. Cruz claims a broader share of the “anti-Trump” vote, or Mr. Rubio and Mr. Kasich are soon forced out of the race.

Both possibilities point toward a harder time for Mr. Trump. The results were consistent with the long-held theory that Mr. Trump has a ceiling on his support. He failed to do any better than one would have projected from his showing on Super Tuesday, despite his wins, the collapse of one of the top candidates (Mr. Rubio) and the departure of Ben Carson.

Imagine, for instance, that for the rest of the primaries, Mr. Cruz outperforms our Super Tuesday-based projections as much as he did Saturday. Those votes come from Mr. Rubio’s column. Mr. Cruz would be positioned to fight Mr. Trump to a draw across the West, including delegate-rich California and winner-take-all states like Montana, Nebraska, Arizona and South Dakota. He would have a good chance in Missouri on March 15, a state that awards its delegates on a winner-take-all basis statewide and by congressional district.

If Mr. Cruz did particularly well — say he won Arizona and California or held down Mr. Trump’s margins enough in Missouri, Pennsylvania, Indiana or Illinois — he could keep Mr. Trump short of a majority. And that would be true even if Mr. Trump won both Ohio and Florida on March 15. It’s not easy for Mr. Cruz, but it’s tougher for Mr. Trump than a continuation of the patterns from Super Tuesday.

Mr. Trump still has two things going for him: Florida and the growing likelihood of drawing Mr. Cruz, not Mr. Rubio, as his main opponent.

The Florida argument is simple enough: Saturday’s results were bad news for Mr. Rubio, who’s making a late and desperate play to win Florida’s big delegate haul. (Only a candidate who wins California decisively can net more delegates than the 99 in Florida). A strong showing on March 15 would put Mr. Trump in a pretty good position to amass a majority of delegates by the end of the primary season, though he would have to continue to win primaries.

Mr. Cruz’s challenge in the blue states is somewhat more complicated. If Mr. Trump fares well on March 15, as expected, his rivals will deny him a majority of delegates only by defeating him in the predominantly blue states that make up the rest of the primaries. But Mr. Cruz has long struggled among the more moderate blue-state Republicans, and it is not even clear that Mr. Rubio’s collapse would change that.

It didn’t Saturday. Look at the results in Louisville or New Orleans. Mr. Trump managed to win both because Mr. Rubio and Mr. Kasich maintained a lot more of their collective support there than elsewhere, preventing Mr. Cruz from going over the top.

Mr. Trump’s win in New Orleans is particularly telling. Based on the Super Tuesday results, you would have expected New Orleans to be one of Mr. Rubio’s better counties in the country: a 44-to-29-percent favorite over Mr. Trump. 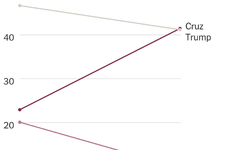 Graphic | Ted Cruz Surged in Louisiana Mr. Cruz fared far better on Election Day than he did among early voters. Mr. Rubio’s support was cut in half.

In the end, Mr. Trump finished with about the same share of the vote as projected — he was at 31 percent — but he won as Mr. Cruz, Mr. Rubio and Mr. Kasich largely split the remaining vote.

Part of the reason Mr. Cruz failed to make inroads in areas like New Orleans, despite Mr. Rubio’s weakness, was John Kasich. It was Mr. Kasich, not Mr. Cruz, who seemed to benefit most from Mr. Rubio’s weakness there and in other metropolitan areas.

Mr. Kasich outperformed expectations by the most in New Orleans. He won 17 percent of the vote there — and that was a showing with little or no precedent for him in the South on Super Tuesday. The only Southern metropolitan counties where Mr. Kasich even broke 10 percent on Super Tuesday were the two counties including Atlanta, Fulton and DeKalb, where Mr. Kasich won around 12.5 percent. Mr. Kasich also hit 16 percent and 22 percent in the counties that include Louisville and Lexington in Kentucky.

In general, Mr. Kasich outperformed expectations by a lot on Saturday, especially for a slate of caucuses and red states. He hit 16 percent in both Kansas and Kentucky, two red-state caucuses. His previous best in a caucus was 5.7 percent (in Minnesota). His previous best in a red state was 7.6 percent in South Carolina, and that’s a fairly establishment-friendly state.

What does that mean? Mr. Rubio was probably under pressure on both sides, from Mr. Kasich on the left and Mr. Cruz on the right.

That’s a fine deal for Mr. Cruz in conservative states like Louisiana or Kentucky, but it’s not going to play out nearly as well in the North. Michigan, which holds its primary Tuesday, might be the first test. If Mr. Cruz and Mr. Kasich are both eroding Mr. Rubio’s support, Mr. Trump might end up winning by an even greater margin than if Mr. Rubio were stronger.

But if Mr. Cruz can fight Mr. Trump to a fairly close race there, even with Mr. Rubio and Mr. Kasich still in the race, it would be a good sign for Mr. Cruz’s chances of denying Mr. Trump a majority of delegates.