The Daily 202: Abortion gaffe underscores why Trump would not put Wisconsin in play during a general election – Washington Post

— Lyndon Johnson knew, when he lost Walter Cronkite, he had lost Vietnam. Well, Donald Trump is losing Ann Coulter. And he’s almost certain to lose the Wisconsin primary next week.

Coulter became rich by courting controversy, being intentionally provocative and insensitive to build a fan base on the far right. She’s been one of The Donald’s staunchest defenders for months. But even Coulter couldn’t bite her tongue after the Republican front-runner retweeted an unflattering picture of Heidi Cruz juxtaposed against one of his own model-turned-trophy wife.

“I’m a little testy with our man right now,” Coulter told Breitbart’s Milo Yiannopoulos in a podcast that posted earlier this week. “Our candidate is mental. Do you realize our candidate is mental? It’s like constantly having to bail out your 16-year-old son from prison!”

“Everything else I could defend,” she added. “He has been more a victim than victimizer. … This is the worst thing he’s done.”

— Trump, who a significant majority of American females already disliked, managed to make himself more toxic yesterday when he said “there has to be some form of punishment” for women who undergo illegal abortions. Facing an onslaught of criticism from pro-life and pro-choice groups, he walked back that comment a few hours later. He sought to clarify that he wants doctors to face punishment for terminating pregnancies. But the damage is done. It’s yet another data point in a “war on women” narrative that could prove fatal should he secure the Republican nomination in Cleveland this July.

A Washington Post/ABC poll conducted earlier this month found that just 23 percent of U.S. women viewed Trump favorably. In the intervening weeks, even before the abortion gaffe, he’s disparaged Mrs. Cruz and gone after a female reporter who was allegedly assaulted by his campaign manager. He’s also continued sniping at Fox News host Megyn Kelly with deeply-gendered language.

It should go without saying, but let’s be clear: Women are not just some demographic. They constitute the majority of the population and they vote at higher rates than men.

— Wisconsin could be Trump’s Waterloo. Ted Cruz leads him in the Badger State by 10 points in a poll released yesterday by Marquette University law school. The survey, looking at next Tuesday’s primary, shows Cruz has gained 21 points since last month while Trump held steady. Trump gets 35 percent among men and 24 percent among Republican women.

There have been dozens of stories over the past few weeks about how Trump changes the electoral map in a general election. Some experts and strategists speculate that he might be able to compete in the industrial Midwest – states like Wisconsin, Michigan and Pennsylvania that have seen their industrial cores hollowed out as manufacturing jobs went overseas. The idea is that Trump would activate some reservoir of blue-collar folks who have either stayed home in the past several presidential elections or voted for Democrats.

What this misses is how many Republican base voters are deeply uncomfortable with Trump and becoming more so. An unknown but not insignificant number of Republican-leaning women in the suburbs of places like Milwaukee will never cast a ballot for Trump, even if they do not like Hillary Clinton. They will either not vote or choose who they perceive to be the lesser of two evils. I picked up on this anecdotally during more than a dozen interviews with conservative women in southeastern Wisconsin last week.

The new Marquette poll backs it up. Overall, seven in 10 Wisconsites view Trump unfavorably. In head-to-head match-ups of Wisconsin voters, John Kasich led Clinton by 9 points (49 percent to 38 percent) and Cruz tied her (44-44). But the Democratic front-runner beat Trump by 10 points (47-34). Bernie Sanders, a democratic socialist without Clinton’s high negatives, beat Trump by 19 points (54-35) when those polled were forced to choose.

— The bigger picture nationally: “If Trump secures the Republican nomination, he would start the general election campaign as the least-popular candidate to represent either party in modern times,” Philip Rucker and Robert Costa write this morning. In addition to the three-quarters of women who view him unfavorably, “so do nearly two-thirds of independents, 80 percent of young adults, 85 percent of Hispanics and nearly half of Republicans and Republican-leaning independents. Those findings, tallied from Washington Post-ABC News polling, fuel Trump’s overall 67 percent unfavorable rating — making Trump more disliked than any major-party nominee in the 32 years the survey has been tracking candidates.”

— Another piece of oft-repeated conventional wisdom—especially by pundits on cable TV—is that nothing Trump does ever hurts him. This may be true among his core supporters, but it is not true among the electorate writ large. Every time he says something like what he said about abortion yesterday, it becomes that much harder for some voters to swallow their fears and doubts. It also less tenable for Trump to recast and reposition himself in the fall.

Part of what frightens GOP insiders so much is The Donald’s rash unpredictability and lack of message discipline. The abortion answer reinforced this. Remember back in 2008 when Republican elites worried about how erratic John McCain was? That seems rather quaint at this juncture. As GOP strategist David Carney told my colleagues Phil and Bob, “It’s like taking a wagon full of nitroglycerine across the prairie. It’s great if you get to the mountains and blow them up for gold. But it’s pretty unpredictable.”

— Increasingly, Trump is endangering Republicans down ballot. Even if he’s not the nominee, he’s damaging the GOP brand. Don’t think him retracting the statement about punishing women who get abortions will prevent Democrats from running negative ads featuring the clip. Or, for that matter, pressing any Republican incumbent who appears with him on whether they agree.

House Democrats are “headed for significant double-digit gains” unless Trump alters his image, Nathan L. Gonzales, editor of the Rothenberg & Gonzales Political Report, tells Paul Kane in a front-page story on whether the GOP might lose the lower chamber.

The DCCC is working overtime to capitalize: “Rep. Denny Heck (D-Wash.), chief recruiter for the Democratic Congressional Campaign Committee, acknowledged that there are not enough Democrats with political surfboards — yet — to try to ride Trump’s wave to victory,” PK reports. “‘We’ve done very good, but not yet great. The process is still underway,’ Heck said. He conceded they have up to a dozen seats where ‘we’re taking a second look’ but they still have some time to find a candidate. The focus is on districts with a highly educated populace, those in the suburbs and those with large numbers of Hispanic voters, or a combination of all three, because those are the voters most consistently offended by Trump’s message.”

WHILE YOU WERE SLEEPING: 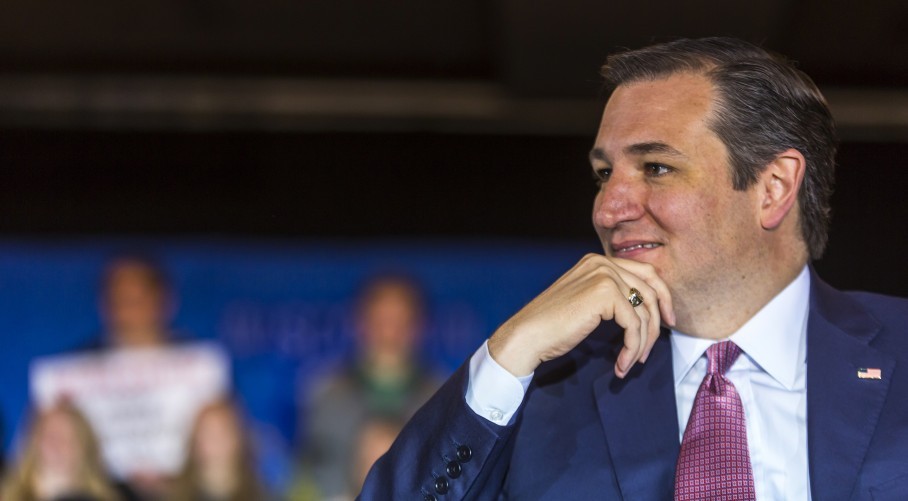 — Cruz jokingly threatened to run over Trump with his car on “Jimmy Kimmel Live.” “If I saw Donald in [my car’s] backup camera, I’m not confident which pedal I’d push,” Cruz quipped, referring to an earlier April Fool’s Day segment. The Texas senator spoke with Kimmel about his former dreams of being a Hollywood actor, as well as his favorite cereal (Muselix) and least-favorite politician (“I dislike Obama’s policies more … but Donald is a unique individual.”) Kimmel, for his part, teased Cruz about his Capitol Hill unpopularity, saying his campaign strategy was “waiting around until his GOP colleagues found someone they liked less.” (Watch the full appearance here.)

— News dump: Trump’s tax counsel confirmed he has been under continuous tax audit by the IRS for more than a decade. Amidst the uproar over abortion, Trump’s campaign quietly released a March 7 letter in which attorneys support the businessman’s claim that he has been “continuously audited” since 2002, citing Trump’s “inordinately large and complex tax returns.” Trump has blamed ongoing audits as the reason he hasn’t released his returns for public examination.

— Trump didn’t just waver on abortion during his hour-long sit-down with Matthews on MSNBC. The GOP front-runner struggled to articulate his opinion on issues ranging from immigration to his “ban on Muslims.” Another noteworthy portion of the night occurred when Green Bay’s mayor asked Trump how he would elevate the decorum of the campaign, saying that many Republicans are “embarrassed.” “I would much rather talk about the issues, but things get brought up,” said Trump. “Sometimes they get brought up because it’s me…but I’d much rather be discussing nuclear … all of the other things we’re discussing.”

— Bernie Sanders announced this morning that he has raised $39 million in March, from contributors giving an average of $27 apiece. Today is the first quarter fundraising deadline, so expect lots of last-minute fundraising solicitations in your inbox…