The Daily 202: Trump’s double-digit loss in Wisconsin is a big deal. What comes next? – Washington Post

Donald Trump leaves a polling place at the Waukesha Fire Department where he went to shake hands yesterday. (Photo by Scott Olson/Getty Images)

— Ted Cruz and Bernie Sanders each won their Wisconsin primary by 13 points. More than two months after voting began in Iowa, front-runners Donald Trump and Hillary Clinton crashed into a cheddar wall.

But Hillary remains almost certain to ultimately secure the Democratic nomination, while The Donald now finds himself facing an emboldened opposition and an increasingly likely contested convention.

— The coverage this morning is brutal.

— “Trump has only himself to blame” for recent stumbles. From Karen Tumulty, Jose A. DelReal and Robert Costa: “The strength and the weakness of his campaign have been Trump himself, who functions as his own chief strategist, consultant, policy czar and communications guru. And that is the same way he built his fortune, said spokeswoman Hope Hicks. ‘In real estate, he builds a building. It doesn’t matter who the vendors are, or who the designer is. His name is on it; it’s his product,’ she said. And he approached the campaign similarly: ‘My name is on this, and nobody else really matters.’ The limitations of that approach have become apparent as the campaign has been spread more thinly and competition has narrowed.”

— “It was a loss for Trump, yes, but more important, a galvanizing moment for the forces aligned against him,” writes National Review Washington bureau chief Eliana Johnson.

— “A hard truth is emerging for the GOP: at a moment where the frontrunner should be getting stronger, Trump is getting weaker,” ABC political director Rick Klein writes. “He may not be beaten in the end, but Trump is staggering into the final two months of voting.”

Donald Trump and the Mets: Queens natives who CAN’T CLOSE

— The Trump campaign emailed reporters a defiant 157-word statement: “Donald J. Trump withstood the onslaught of the establishment yet again. Lyin’ Ted Cruz had the Governor of Wisconsin, many conservative talk radio show hosts, and the entire party apparatus behind him. Not only was he propelled by the anti-Trump Super PAC’s spending countless millions of dollars on false advertising against Mr. Trump, but he was coordinating `with his own Super PAC’s (which is illegal) who totally control him. Ted Cruz is worse than a puppet— he is a Trojan horse, being used by the party bosses attempting to steal the nomination from Mr. Trump. We have total confidence that Mr. Trump will go on to win in New York, where he holds a substantial lead in all the polls, and beyond.”

A former top adviser to Rick Perry hit the nail on the head:

This is one of those statements that you write to make yourself feel good but you never release. #wow https://t.co/CZJw05GbRN

Always go classy in victory and defeat! Better for you, better for how others see you. Magnanimity is attractive.

Wisconsinites are very serious about the idea of “Wisconsin nice.” That flashy, brash, serial insulter Trump is opposite of Wisconsin nice.

As Newt Gingrich put it on on Fox News, “He’s done a lot of things right, but he is also like a rookie quarterback in the Super Bowl. This is the big leagues. It gets much tougher as it goes on. But he is going to have to improve his game if he’s gonna win in the end.” 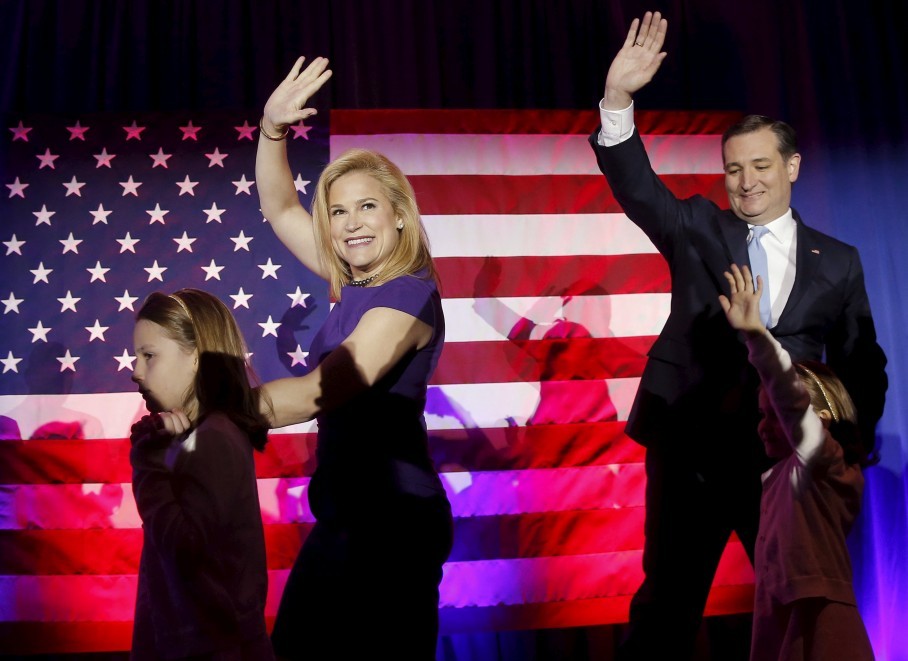 Ted Cruz and his wife Heidi arrive for their victory party in Milwaukee. (Reuters/Jim Young)

— Cruz showed he can unite the Stop Trump movement:  “Give Cruz credit: When he needs to win, he wins,” writes The Fix’s Chris Cillizza. “If he had lost Wisconsin, pressure would have ramped up to bow to the reality of Trump as nominee. Now, he can make the case that Wisconsin fundamentally changed the trajectory of the race … For Cruz, the rest of the primary is about two things: 1) Keeping Trump under the 1,237 delegates needed to formally clinch the nomination, and 2) Positioning himself as the only Trump alternative. Cruz took a big step in the right direction on both fronts in Wisconsin.”

Cruz is doing better in Wisconsin against Trump than Romney did in 2012 against Santorum. More votes, wider margin, and more delegates.

— It was a bad night for John Kasich. The Ohio governor only pulled 14 percent, underperforming the polls. He is fading, and his poor showing will deprive him of buzz and mean less media coverage/oxygen in the coming weeks.

“Almost as important as Cruz’s defeat of Trump is the weakness of Kasich,” said Weekly Standard editor Bill Kristol, adding that he “could now see wholesale gravitation of anti-Trump voters to Cruz … Cruz strength in upscale suburbs around Milwaukee raises question: Couldn’t he come close to replicating this in suburbs in NY, MD, CT, etc?” The Washington Examiner’s Philip Klein says Kasich has become a “fringe candidate.”

I make fun of @JohnKasich a lot, but we’re not so different. For example, I’ve also won 0 GOP delegates in 24 states this year.

#2 Sen Smear spent millions distorting @johnkasich record. Won’t get away with it again. Will only see inside the WH as a tourist. (2/5)

— The battle enters a new phase: “The Republican race is about to become granular,” Dan Balz explains. “The coming battles will be waged in targeted congressional districts where Trump shows weakness regardless of his statewide appeal, in hand-to-hand competition at state party conventions where the delegates are being selected, and ultimately in a battle for the hearts and minds of the men and women who will go to Cleveland, bound or unbound on the first ballot but free agents after that. For Trump and Cruz, winning states certainly remains important. But every delegate denied to Trump will be considered a small but important victory by the anti-Trump forces.”

— Trump plans to give a series of policy speeches to show he’s “presidential,” addressing topics such as how he’d strengthen the nation’s military, how he’d reform education and the criteria by which he would select Supreme Court justices. Ben Carson said he spoke with Trump by phone yesterday about a list of “10 to 12 justices” from whom Trump is considering to fill the court vacancy. (Tumulty and Costa)

— New York votes in 13 days: Trump is going to have a huge rally on Long Island tonight. His staff says 18,000 people have requested tickets.

Trump should win New York, and polls show him over 50 percent. “But New York’s rules are less than ideal for Trump at a time when he needs to sweep up as many delegates as possible,” Balz explains. “For starters, the state’s 95 delegates will be awarded proportionally, rather than on a winner-take-all basis. Beyond that, 81 of those delegates are distributed on the basis of results in the state’s 27 congressional districts. Trump could gain 14 delegates if he wins more than 50 percent of the statewide vote. Otherwise, he will share those delegates with any rival who tops 20 percent. In any congressional district where he falls short of 50 percent, even if he has the plurality of votes, he will give up one of the three delegates awarded in each of those districts. If he runs second in any district, he would pick up just one delegate.”

— Quite a cast of characters is helping Trump in the Empire State: Carl Paladino, the 2010 Republican gubernatorial nominee, is one of Mr. Trump’s co-chairs in the state. And former Rep. John Sweeney has been hired by the campaign to help out for the next two weeks, per the NYT’s Maggie Haberman. Sweeney was arrested twice on drunken driving charges after losing to Kirsten Gillibrand in 2006. Paladino “has been intricately involved in the preparations, scheduling Mr. Trump to land ‘in every major population center across the state,’” Maggie reports.

— Cruz now must capitalize on his victory by winning over the Republican establishment and raising money. “He tried to sound a conciliatory note in his victory speech,” Sean Sullivan and Philip Rucker relay. “Cruz used his victory speech to draw unmistakable contrasts with Trump’s incendiary campaigning. ‘We are not here to curse the darkness, but to light the candle that can guide us … to a safe and sane future,’ he said. Then Cruz brought his wife, Heidi, the subject of a nasty feud with Trump and his fans, to the podium and showered praise on her.”

“Tonight is a turning point. It is a rallying cry,” he added. “Either before Cleveland or at the convention in Cleveland, together we will win a majority of the delegates.”

Watch a 1-minute highlight reel from the speech:

— But there is still a lot of bad blood. Rep. Pete King (R-N.Y.) declined to say who he’ll vote for on CNN. “But I can tell you one thing: I would never vote for Ted Cruz,” said King, who backed Marco Rubio until he dropped out. The Hill notes that King told Cruz to “go back under a rock” when the candidate questioned Trump’s “New York values” in January.

When you consider that Cruz is clearly the only viable alternative to Trump, it’s amazing he doesn’t have more Senators + Govs with him.

— And it’s notable that Democrats are salivating at the prospect of facing Cruz in a general election:

There is not a Democrat anywhere in America who see’s a Cruz nomination as anything other than a great gift https://t.co/gbkuztd7Zm

It’s a twisted state of affairs when there’s a collective sigh of relief that TED CRUZ wins a state. Welcome to the future GOP.

— It was another bad night for Hillary, but does it matter? The Vermont senator emerged with a solid victory in Wisconsin, prolonging his “dogged but improbable” bid to catch Clinton. Clinton won heavily African American Milwaukee County by fewer than 4 points. (John Wagner, Anne Gearan and Abby Phillip)

Sanders celebrated at a boisterous rally last night in Wyoming, the site of Democratic caucuses this Saturday: “If we wake up the American people, and working people and middle-class people and senior citizens and young people begin to stand up and fight back and come out and vote in large numbers, there is nothing that we cannot accomplish,” he said.

Hillary offered a much classier concession than The Donald:

Congrats to @BernieSanders on winning Wisconsin. To all the voters and volunteers who poured your hearts into this campaign: Forward! -H

— Why it matters: “Yes, Clinton has a commanding, close to insurmountable, delegate lead over Sanders. BUT Clinton has now lost seven of the last eight votes in this race to Sanders, a remarkable thing,” writes Chris Cillizza. “Everyone expects, and has long expected, Clinton to be nominee. The delegate math is close to conclusive. And yet, Sanders keeps winning … New York now becomes even more important for Clinton now as, if she loses it, the ‘she’s limping to the nomination’ storyline will take over, which is very dangerous to her attempts at building momentum for the general election.”

— Bottom line: Clinton remains more likely than anyone else to be inaugurated in nine months. In basketball terms, if the Republicans had fielded a one seed, as opposed to the seven or eight seed, there would be much greater cause for alarm in Brooklyn. And, if a Democrat like Elizabeth Warren had run, Clinton might again be on the verge of blowing it.