Bill Clinton responds to being interrupted by Black Lives Matter protestors during a rally yesterday in Philadelphia. (Ed Hille/The Philadelphia Inquirer via AP)

Bill Clinton spent 13 minutes yesterday forcefully responding to Black Lives Matter activists who were heckling him. Speaking in an overwhelmingly African American neighborhood of Philadelphia, the city that will host this summer’s Democratic National Convention, the former president offered a spirited defense of his record on civil rights, his signature crime bill and his wife.

One of the protesters held a sign that declared, “Black youth are not super predators.” That’s a reference to when Hillary Clinton spoke in 1996 of “the kinds of kids that are called ‘super-predators’” and said “we have to bring them to heel.”

Clinton pointed to the signs. “This is what’s the matter,” he said. “I don’t know how you would characterize the gang leaders who got 13-year-olds hopped up on crack and sent them out onto the street to murder other African American children. Maybe you thought they were good citizens. She didn’t! … You are defending the people who kill the lives you say matter! Tell the truth! You are defending the people who caused young people to go out and take guns.”

The 69-year-old went on an extended riff about why he and his wife are the ones who have really fought to make black lives matter:

Bill noted that Hillary, unlike Bernie Sanders, did not vote for the crime bill. “She was spending her time trying to get health care for poor kids,” he said. “Who were they? And their lives matter!”

He also highlighted the Democratic front-runner’s work for the Children’s Defense Fund as a young attorney in Alabama and her work to stop the spread of HIV in Africa as Secretary of State. “I’ll tell you another story about a place where black lives matter: Africa,” he said.

— In a year when the drama has mostly been on the Republican side, it made for great political theatre. And it gave Bill Clinton another unforgettable “Sister Souljah Moment.” In May 1992, the hip-hop artist suggested that killing white cops might not be so bad in the wake of the Los Angeles riots. Speaking at a convention organized by Jesse Jackson’s Rainbow Coalition, the then-governor of Arkansas ripped into her. “’If you took the words ‘white’ and ‘black’ and reversed them, you might think David Duke was giving that speech,” he said. “We have an obligation, all of us, to call attention to prejudice whenever we see it.” (C-SPAN’s archive has the video.) 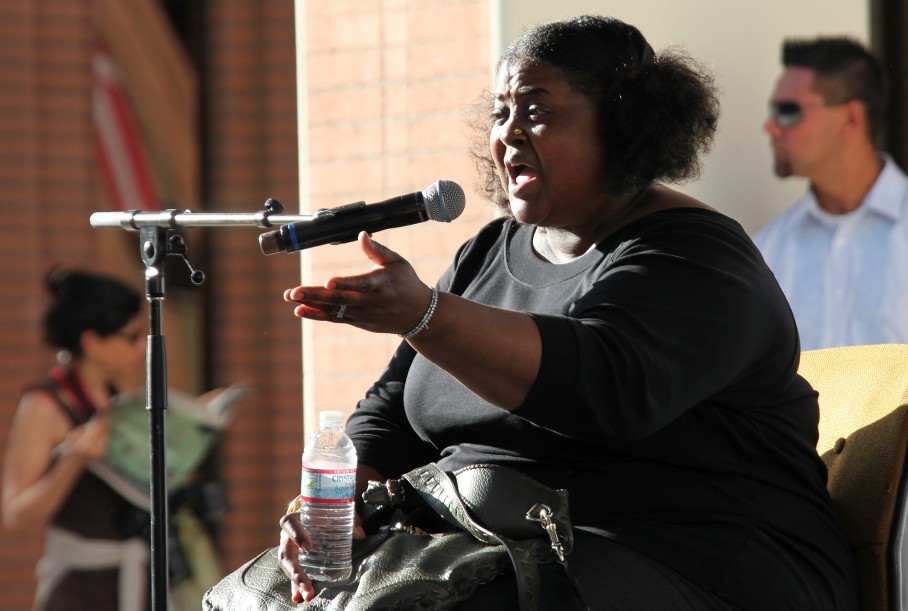 Calling her out became legendary and helped Clinton pivot from the Democratic nominating contest he was wrapping up, when he needed base voters, to the general election, when he needed independents. Twenty-four years later, we are at a very similar phase in the campaign cycle.

— Yesterday’s showdown in Philadelphia quickly became a Rorschach Test. Republicans and liberal activists inclined to dislike WJC called it evidence of him being out of touch and over the hill while Clinton loyalists said it was the Big Dog at his best. The majority of the crowd of 400 cheered Clinton as he made the protesters his foils.

— As many mainstream media outlets cover the comments as another off-message embarrassment for his wife’s campaign, let’s dispel once and for all with the fiction that Bill Clinton does not know what he’s doing. He knows exactly what he’s doing. 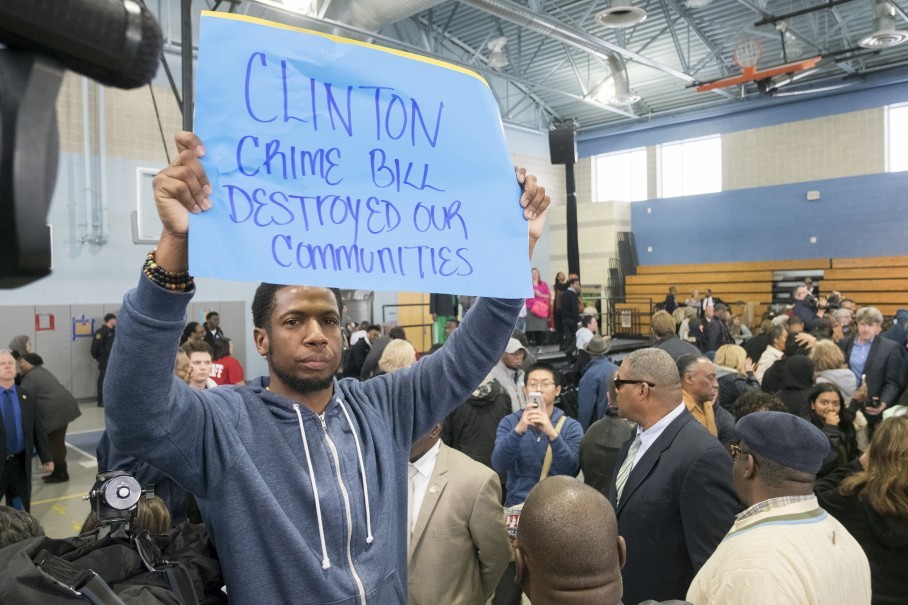 Protester Rosco Farmer is corralled in the back of the auditorium by civil affairs officers near the end of Bill’s rally. (Ed Hille/The Philadelphia Inquirer via AP)

FROM CONTRITE TO DEFIANT:

— A year ago, most D.C. pundits would have bet that the 2016 general election would pit Hillary versus Jeb, and that Democrats could win by making the campaign about whether voters wanted to give Bill or W. a third term. The Bushes are now long gone. Indeed, both Donald Trump and Ted Cruz criticize the former president to varying degrees. Because the Democratic primaries turned out to be more competitive than anticipated, it’s been hard for the Clintons to lean on nostalgia for the 1990s. Instead the former president and first lady have been pressed constantly from the left on everything from NAFTA to DOMA.

— Bill’s comments about the Black Lives Matter movement suggest that a major pivot in the campaign’s messaging is on the way. Smarting from the 2008 defections of African Americans to Barack Obama and recognizing that securing the Democratic nomination this time would depend on running up the score among minority voters, the Clintons set out in the spring of 2015 to inoculate themselves from criticism over the crime bill.

“We overshot the mark,” Bill wrote in the foreword to a book on mass incarceration that came out exactly one year ago. The same month, Hillary gave a speech at Columbia University — in the wake of the Baltimore riots – to promise that criminal justice reform to end sentencing disparities — which were made worse by her husband’s bill – would be a top priority as president.

Last July, the former president told the NAACP convention that he deeply regretted sending minor criminals to prison “for way too long.” “I signed a bill that made the problem worse, and I want to admit it,” he said.

Yesterday, the former president laid blame on congressional Republicans for the parts of the law that have increased mass incarceration. He said then Sen. Joe Biden told him it could not pass if the tough-on-crime provisions were not added in.

After Hillary was confronted this February by a protester about the “super predator” comment, she expressed regret. “Looking back, I shouldn’t have used those words, and I wouldn’t use them today,” she said in a statement.

— Now, as the general looms, exit polls show that his wife is badly under-performing with white voters in key battlegrounds compared to 2008. But Bill’s strategy is not without risk. Hillary needs high African American turnout to beat Bernie in New York on April 19 and in the Pennsylvania and Maryland primaries on April 26. She also needs to keep the Obama coalition activated through November.

WHILE YOU WERE SLEEPING:

— Bernie Sanders is going to speak at the Vatican next week, John Wagner scoops. He’ll step off the campaign trail to appear at a conference on social, economic and environmental issues. He’ll leave for Rome immediately after his debate with Clinton on April 14.

— Sanders turned his stump speech into comedy on “The Late Show with Seth Meyers”: The Vermont senator offered a comedic twist on his disdain for the billionaire class, roasting the “one percenters” alongside Meyers on a segment called “Ya Bernt.” “One percent — what do you need all that money for?” Sanders asked. “If I didn’t know any better, I’d think you were trying to compensate for something.” As for the big banks, Sanders had this to say: “My advice is the same advice I give to a couple contemplating an open relationship. It’s time to break up.” (John Wagner)

Hillary Clinton rides the subway in the Bronx yesterday before jetting off to Ohio and Colorado for fundraisers. (Photo by Yana Paskova/For The Washington Post)

— Colorado Gov. John Hickenlooper – who could be a contender in the veepstakes — hosted Hillary for a fundraiser at his home in Denver last night. Isaac Slade, lead vocalist for The Fray, performed for the 530 attendees. A white noise machine was set up to prevent reporters standing across the street from hearing Hillary’s comments in the governor’s backyard, according to the local CBS affiliate.

— Seven in 10 Americans now view Trump unfavorably, according to an AP-GfK poll. And the negativity transcends typical “voter blocs” of age, race and ideology: “It’s an opinion shared by majorities of men and women; young and old; conservatives, moderates and liberals; and whites, Hispanics and blacks … a devastatingly broad indictment of [Trump].” The numbers also suggest Trump could be losing his core base: “In the South – a region where Trump has decisively won many primary contests – close to 70 percent of voters view him unfavorably. And among white voters without a college education, 55 percent have a negative opinion.”

— Not ready to make nice: Ted Cruz refuses to apologize to Senate Majority Leader Mitch McConnell for publicly calling him “a liar” last year. “That ain’t gonna happen,” the Texas senator said on CNN last night. “And if the Washington lobbyists want to see that happen, they can hold their breath a long, long time.” So much for trying to win over his Senate colleagues…