The Daily Trail: Cruz and Kasich’s stop-Trump deal off to a shaky start – Washington Post

Things that last longer than a united front on that Ted Cruz-John Kasich delegate deal: Certain unrefrigerated dairy products. The lifespan of the average fruit fly. A cake left out in the rain.

“A sudden political alliance between Ted Cruz and John Kasich against Republican presidential front-runner Donald Trump quickly ran into speed bumps Monday that exposed the plan’s risks and called into question whether it would work,”  report Sean Sullivan and Dave Weigel.

“In their unconventional last-ditch scheme, Kasich said he would clear the way for Cruz to face Trump in Indiana while Cruz would return the favor in Oregon and New Mexico. The plan aimed to produce what anti-Trump Republicans have yearned for since the fall: a one-on-one showdown with the mogul.

“But less than 12 hours after the pact was announced, Kasich undercut the idea by declaring Monday that his supporters in Indiana should still vote for him. The Ohio governor also plans to keep raising money in the state and to meet Tuesday with Republican Gov. Mike Pence.

“Cruz, meanwhile, said that Kasich was ‘pulling out’ of the state. A super PAC supporting the Texas senator also said it would continue to air an anti-Kasich ad in the state — a sign the Cruz camp fears Kasich could still peel away enough support to sink Cruz’s chances here.

“The tumult fueled doubts about the arrangement among voters and Republican elites, who worried that Cruz and Kasich have handed Trump a ready-made argument that the party establishment is plotting against him. The mogul said as much in a series of stump speeches on the eve of primary voting on Tuesday, when Trump is poised to rack up delegates in five states along the Eastern corridor: Connecticut, Delaware, Maryland, Pennsylvania and Rhode Island.

And the deal does make sense, reports Weigel. For Ted Cruz.

“The three states — Indiana, Oregon and New Mexico — assign delegates in very different ways,” notes Weigel. “By ceding Indiana, it appears that Kasich did Cruz more of a favor than Cruz did him, in a state where Kasich’s team actually succeeded in getting friendly delegates elected to the slate.”

The #math: “The difference between a narrow Trump win in a three-way race and a narrow Cruz win in a modified two-way race could be 36 to 42 delegates — at least as many as Cruz got by winning the Wisconsin primary.

“The stakes are far lower in Oregon and New Mexico.” In Oregon, for instance, “the difference between a narrow Trump win and a narrow Trump loss to Kasich could be as little as two delegates.”

Sure, “the pact took Cruz’s boot off his neck in a crucial state, where one pro-Cruz super PAC was already buying up airtime to attack him. But in delegate terms, Cruz, by far, got the most from the deal.”

(Despite that fact — and the rocky rollout of their first deal — a similar approach may be under discussion in California.) 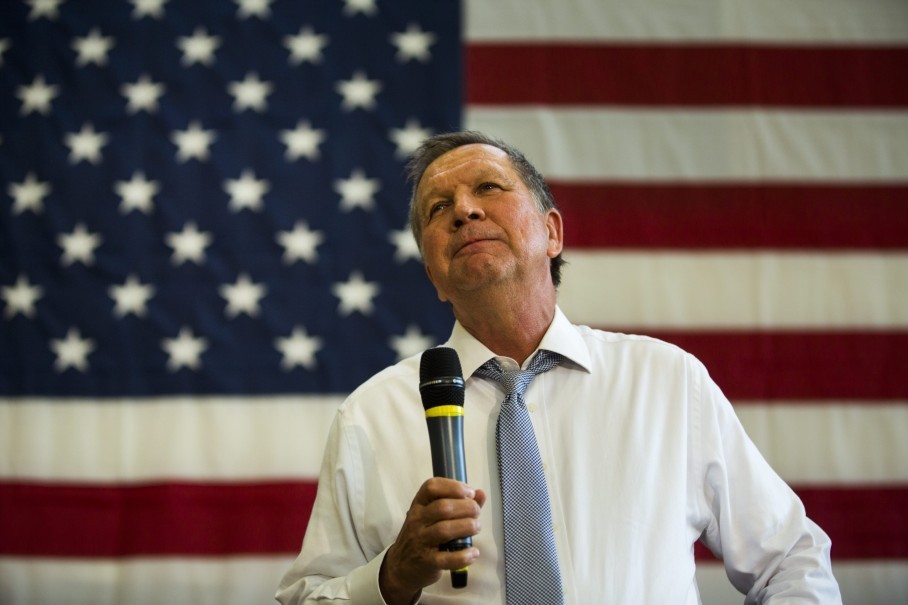 If you think that sounds like a shaky basis for a successful partnership: you’re not alone. Here’s why it won’t work, says Chris Cillizza:

“1. Candidates and campaigns are strategic. Voters aren’t. …the average voter doesn’t care who some other politician thinks would be the best choice in a different race. And they definitely don’t want a politician they sort of like telling them to be for someone else who they likely don’t like at all.

“2. The overlap between Kasich and Cruz voters is almost nonexistent. …”

The Cruz-Kasich deal had to be announced publicly, because the whole point was to get the message to their supporters and super PACs. But that highlights another drawback:

“3. The alliance perfectly fits Trump’s “rigged” narrative.  If Donald Trump could have engineered a scenario that would fire up his anti-establishment base any more than it already is, the public announcement of a Cruz-Kasich alliance would be how he would have done it. Now it’s not just hard-to-understand delegate math where the GOP establishment is plotting against Trump but a high-profile handshake agreement between a sitting senator and governor. “

And Trump happily accepted the gift, saying Monday the move smacked of “desperation.”

“Honestly, it shows such total weakness, and it’s pathetic when two longtime insider politicians — establishment guys, whether you like it or not — have to collude, have to get together to try to beat a guy that really speaks what the people want,” Trump said during a campaign event in Warwick, R.I. (Here is the epic original Trump response to the announcement, annotated.)

They may or may not be more “desperate.” They’re certainly weaker. But Trump is the one who continues to bleed delegates.

After a third consecutive weekend in which Cruz dominated Trump in the delegate hunt, the mogul is going to the mattresses, with plans to personally appeal to delegates at state party conventions in California and Virginia later this week, reported Robert Costa.

“The stops are part of an evolving strategy with Trump’s inner circle about how to counter Sen. Ted Cruz’s highly organized efforts at recent state Republican conventions,” says Costa. “Alarmed by Cruz’s success in states where Trump has done well, Trump is said to have personally requested his high command to add these two state conventions to his schedule, confident that his presence and overtures could convince some delegates to get behind his campaign.”

On Monday, the front-runner’s campaign also announced that former Chris Christie campaign manager Ken McKay had signed on as a senior adviser — the third Trump hire of a rival’s former campaign chief so far this cycle, along with Ed Brookover (Ben Carson) and Rick Wiley (Scott Walker.) 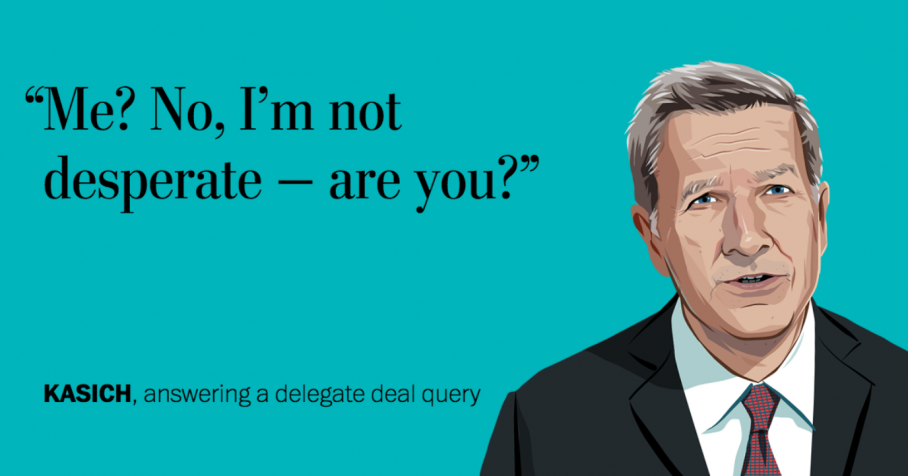 Trump made his opponents stars of his stump speech today. The other 2016 front-runner made Trump the star of hers.

Hillary Clinton continues to largely avoid mentioning her own primary rival at all, knocking Trump today for being too rich and out of touch.

“Don’t just fly that big jet in and land it…go make a big speech and insult everyone you can think of and then go back, get on that big jet and go back to your country club house in Florida or your penthouse in New York,” she said at a campaign stop in Pennsylvania. “I kind of don’t think that kind of puts you in touch with what’s going on.”

(This might sound like a tough attack line for a New York millionaire to pull off. Generally speaking, it might be — unless they happen to be running against, say, a New York billionaire.)

Bernie Sanders himself is taking aim at someone else on the eve of the Connecticut primary: that state’s Democratic governor.

“We need to revolutionize mental health treatment in this country,” the Vermont senator said in Hartford today, repeating comments he made in New Haven yesterday criticizing a mid-year budget reduction package proposed by Gov. Dannel Malloy. “We need more treatment, more counselors, and I would hope very much the governor will rethink the wisdom of cutting mental health workers in the state of Connecticut.”

It isn’t a one-sided battle. “Malloy, meanwhile, while campaigning for Clinton, has sharply questioned Sanders’s record on guns, including a 2005 vote to provide legal immunity to gun dealers and manufacturers when their products are used to commit crimes,” notes John Wagner.

The context, of course: “The sparring between the two comes amid questions about how much Sanders would seek to do to unify the party if Clinton becomes the Democratic nominee.

“It also highlights one big advantage Clinton enjoys in the race: overwhelming support from the Democratic Party’s elected officials.” In months past, Sanders could afford to run against that establishment. Now his only chance at victory depends on wooing them and their superdelegate votes.

THE VIEW FROM THE FIELD:

Bernie Sanders appears in a gym at the University of Pittsburgh (home of the Panthers). pic.twitter.com/Kujxdg4GBY

Feeling like a frat party at this Trump rally at a PA college. Lots of students, some of whom have been drinking. pic.twitter.com/gia8NN1e5t

Wilkes Barre, Pa: Biggest crowd I’ve seen in a while for Trump. Huge even. pic.twitter.com/3sStV0ag1O

One protester is holding a sign that lists tragedies as Trump Steaks, Trump Steaks and 7-11. pic.twitter.com/HrwyODikCs

Met a McKees Rocks voter who played basketball with Kasich growing up. “We always thought he’d be pope.”

“I liked Rand Paul,” a woman in Columbus, IN, begins conversation with Cruz. pic.twitter.com/whU8Prmxsn

Cruz on Indiana ——> “If and when we win, it may feature, like the Indy 500, a campaign crashing and burning and catching on fire.”

ON THE MENU: SHADE. 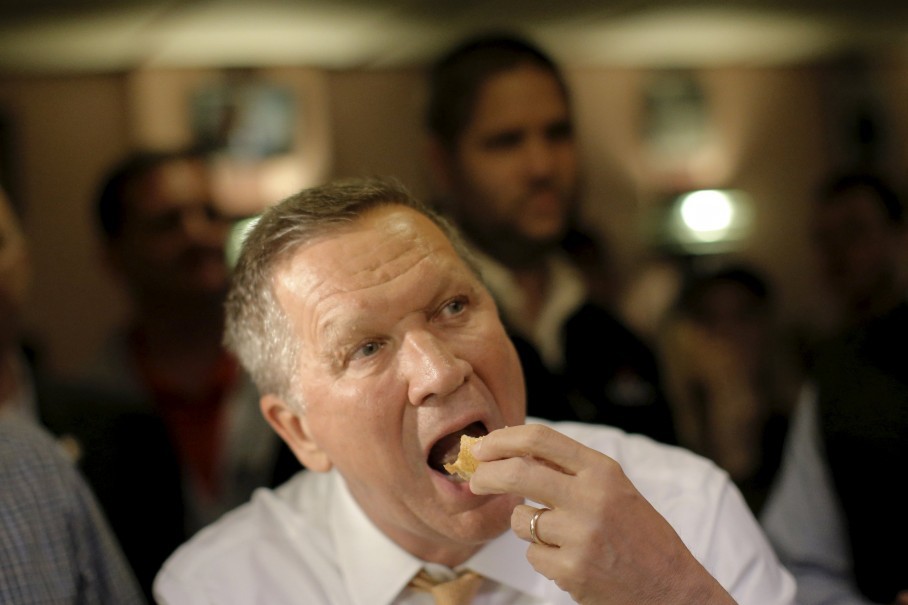 The campaign rule: #NeverEat, apparently. At least, not where people can see you. REUTERS/Brendan McDermid

Donald Trump finds a lot of things “disgusting.” A lot. The list includes (but is not limited to) certain ideas. Industries. People. And today: John Kasich’s eating habits.

At a Rhode Island campaign stop, Trump called Kasich a “stubborn guy who eats like a slob,” reserving specific scorn for the governor’s pancake consumption approach.

Some observers noted that he maybe sort of had a point, universally speaking:

As a rule, politicians don’t look great while eating. pic.twitter.com/zYslcq6mP7

It’s worth noting WH aides make sure @POTUS almost never eats on camera. So in that way, Trump is very presidential. https://t.co/bdUBsAu94e

.@RealDonaldTrump, we were looking for some Trump steaks for the governor, but no one seems to sell them anymore. pic.twitter.com/zS5eLtfHOc

Clearly, the GOP presidential race should just be settled by a pancake eating contest.

On a related note: yes, this year’s veepstakes process could be the most chaotic in decades.

We have narrowed our VP candidates to a short list and are going thru the normal processes associated with picking a running mate.#CruzCrew

—Fifty-six percent of Trump voters in a new USA Today/Suffolk poll say they would support him if he loses the GOP nominating fight and runs as an independent; 28 percent say they wouldn’t. (The standard asterisk appended to this poll result: Primary voters often say they will not support their party’s nominee if that nominee is not their candidate of choice. Until they do. Usually.)

—Mark your calendars: the Donald Trump-Megyn Kelly interview is scheduled for May 17.

—The GOP may be in chaos, but Democrats are still struggling to capitalize on it. Case study: tomorrow’s Pennsylvania Senate primary, which has had the White House wading into messy primary season politics.

—In 2012, we thought the best book on the Obama re-election campaign would be a compendium of Biden pool reports, verbatim. Today, we got a taste of what we’re missing this time around, via White House pooler Edward-Isaac Dovere: “The woman at the table there looked up at him nervously and said, ‘I’m petrified right now.’ Biden tried to relax her, but to no avail. ‘I’ll never come here on my day off again,’ she said.”

FROM THE REPORTER MAILBAG:

COMING TOMORROW: The last time you will have to hear the words “Acela primary” used together! At least for four years or so!

Connecticut, Delaware, Maryland, Pennsylvania and Rhode Island head to the polls with some key Senate primaries on the ballot along with the presidential race; check here tomorrow evening for full results and team coverage.

THE DAILY TRAIL PIT STOP: #Math! A College Humor pundit explains why, despite the numbers, Bernie Sanders is actually winning.