Inside Trump’s Closed-Door Meeting, Held To Reassure ‘The Evangelicals’ 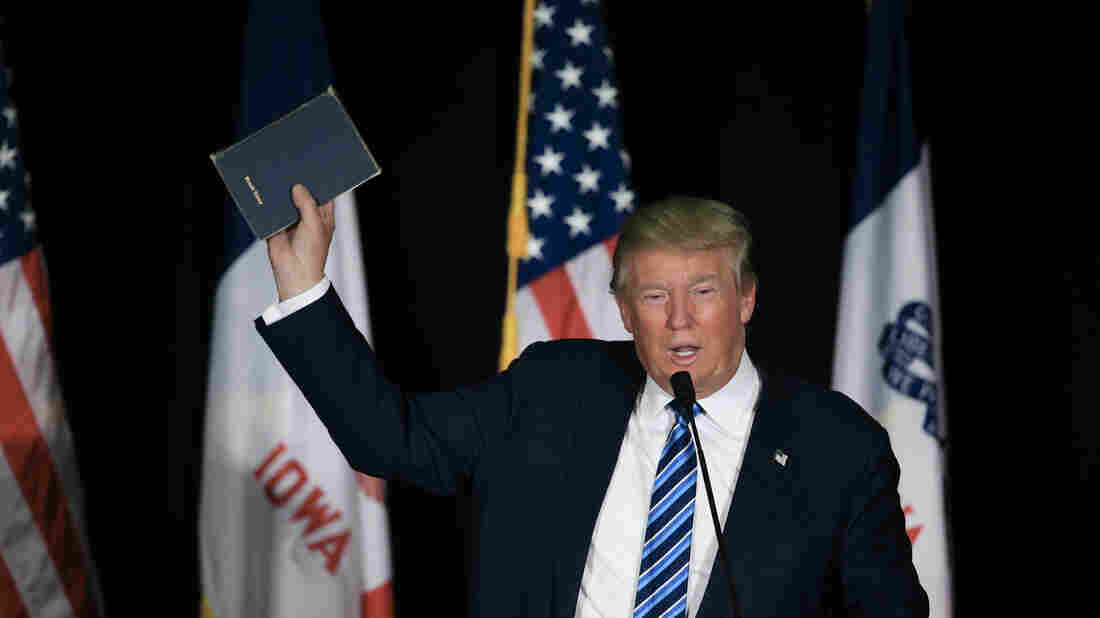 Most Donald Trump events kick off with music from Elton John or the Rolling Stones at deafening volumes. But praise choruses ruled the day Tuesday as hundreds of conservative Christians gathered at a hotel in Times Square to question Trump on Tuesday morning.

Under glittering pink-and-white chandeliers, evangelicals and conservative Catholics filled the large ballroom, some raising their hands and closing their eyes as they sang, “Seek ye first the Kingdom God/And his righteousness/And all these things shall be added unto you.”

The meeting was closed-door and invitation-only, but NPR was able to obtain access to observe the event.

“We Love Each Other”

As soon as Trump entered the room, it quickly became clear this was a largely friendly audience. The moderator, former Republican presidential hopeful and former Arkansas Gov. Mike Huckabee, told Trump this would not be an “inquisition,” but rather people had come because they want someone who will “lead this nation out of the abyss.”

Organizer Bill Dallas of the Christian group United in Purpose says the event was designed to give religious conservatives, some of whom have had concerns about Trump, a chance to “understand” him better before the November election. It started out as a meeting for about 100 leaders but quickly grew to nearly 1,000 after a “tidal wave” of interest.

“That shows we all love each other,” Trump told the group.

Huckabee began by asking Trump about his family, saying that he’d seen them up close: “People can fake it on stage, they can walk out and do the happy family moment, but you can’t fake that backstage.”

Trump thanked Huckabee for the “nice question,” and said, “I have great children … through God they were born intelligent, they all went to great colleges.” He added that he always advised them all to avoid alcohol, drugs and smoking.

Trump drew applause for another bit of parenting advice: “If they do go to church, and if they start at a young age, that’s a tremendous asset … because you don’t see that as much today … That’s not so automatic anymore.”

“You Don’t Really Have Religious Freedom”

Trump then turned to what evangelical leaders have told him is a top priority – religious freedom. Many conservative Christians say they feel threatened by lawsuits aimed at requiring business owners to provide services for same-sex weddings, restrictions on prayer in public schools, and a growing move to allow transgender people to use the restrooms they choose. 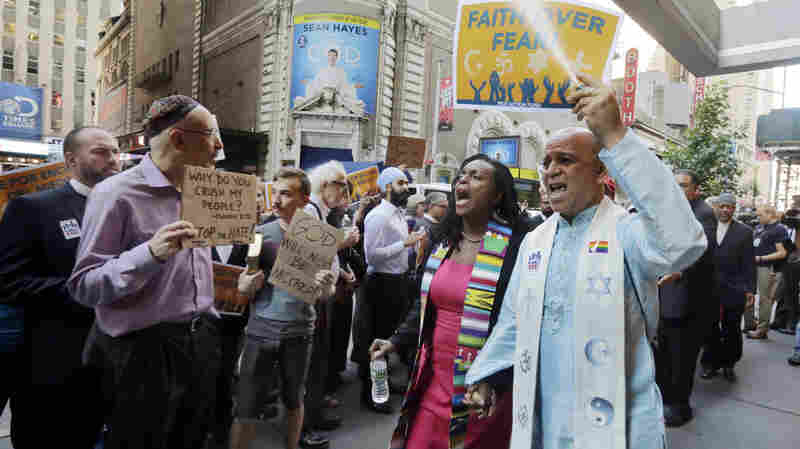 Trump said ministers, in particular are “petrified” of talking about politics because of IRS rules barring groups like churches that receive charitable tax exemptions from engaging in political advocacy.

“We are gonna get rid of that,” Trump said, though he did not specify how he’d change the law. Pastors aren’t allowed to endorse candidates from the pulpit, but that rule is rarely enforced.

This election that is coming up is not about a person … It’s about America and what America represents.

Fresh from a smaller-group meeting between Trump and about 40 key leaders, Nebraska businessman Charles Herbster announced, “We just spent time with the next President of the United States, Donald J. Trump.”

Trump had just met with members of the steering committee that helped organize the event — including Tony Perkins of the Family Research Council, psychologist and radio host James Dobson, Bob Vander Plaats of the Iowa Family Leader, longtime activist Gary Bauer, and others.

From that room, the Rev. E.W. Jackson tweeted a video of a moment where Trump questioned Democratic rival Hillary Clinton’s faith, saying, we don’t know “anything about Hillary in terms of religion. You know, she’s been in the public eye for years and years, and yet there’s no, there’s nothing out there, there’s like nothing out there.”

Trump continued: “You can pray for your leaders, and I agree with that — pray for everyone — but what you really have to do is you have to pray to get everyone out to vote for one specific person.“

Clinton has spoken openly about her Methodist faith, and often campaigns in black churches.

Event organizer Dallas, CEO of the group United in Purpose, says he will issue a similar invitation to Clinton to meet with Christian leaders, probably in the next couple of weeks.

For about an hour on Tuesday, Trump took questions from a pre-selected handful of Christian leaders, among them Dobson, outgoing Southern Baptist Convention President Ronnie Floyd and Perkins.

The Rev. Sammy Rodriguez, who leads a network of Latino churches, told Trump, “We are not in favor amnesty, but you talked about building a wall … There is an idea in the Latino community that you have no commitment whatsoever in building a bridge with the Hispanic American community.”

Trump responded by repeating a common theme from the campaign trail — the importance of border security — and added that he has “thousands” of Latinos working with him, who are “phenomenal people.”

Dobson asked one of several questions about religious freedom, to which Trump reiterated his promise to appoint conservative Supreme Court justices. He said he would soon announce several more potential nominees to the court, to go along with the 11 he’s already suggested.

“They will be great intellects, talented men at what they do — and women — but also be pro-life,” Trump said.

In that answer, Trump took aim at his Democratic rival: “If Hillary gets in … we know exactly what’s gonna happen. We’re gonna end up being a different country … a Venezuela.”

LGBT Rights: All About The Judges

Trump was less comfortable addressing questions about LGBT rights – an issue he’s been stressing in the wake of the massacre in Orlando. Kelly Shackelford of the conservative legal organization First Liberty asked for his take on pending cases involving gay and lesbian weddings — what he described as an “attempt to use gay rights to trump religious freedom.”

Trump returned to the subject of religion, bringing up his proposed temporary ban on Muslims entering the United States, saying “I was met with tremendous rebuke — and praise. I was met with everything … but if I said something about Christianity, it would be a whole different thing. We can’t let that happen.”

He added that things were different “when I used to go to church,” telling the crowd, “You’re the most powerful group in the country, but you have to band together.”

There’s no perfect person — there’s only one and that’s the Lord Jesus Christ, but he’s not running for president of the United States.

As Huckabee wrapped up the question-and-answer session, he quipped, “After what you said about church and going to church, I have a feeling you’re going to have a thousand invitations to show up at churches every Sunday.”

There was no time for most people in the room to directly question Trump. But an afternoon panel discussion allowed for a larger-group conversation about Trump’s appearance. Several speakers expressed concern about whether Trump is conservative enough on LGBT issues.

Greg Quinlan of the group Parents and Friends of Ex-Gays & Gays, who describes himself as a “former homosexual,” was among those who raised the subject.

“The big elephant in the room for us is the homosexual agenda, whose objective is to silence the church, period. I was a part of that movement, I know exactly what they are doing,” Quinlan said. “What are we going to do to address the homosexual agenda, the homosexual juggernaut, and what will Donald Trump do? We know what Hillary Clinton will do because her initials are HRC — Human Rights Campaign,” he said, referring to a group known for its activism on issues including LGBT rights.

Quinlan suggested getting together a “panel of ex-gays” to meet with Trump to explain that “people can change.”

To that, Ralph Reed of the Faith & Freedom Coalition nodded. He mentioned Georgia Gov. Nathan Deal’s veto of a “religious liberty” law earlier this year after objections from business and gay rights groups.

“There has been an alliance built between the radical gay lobby and corporate America to intimidate these governors from signing that kind of legislation,” Reed said.

Similar concerns lingered for Jim Garlow, pastor of Skyline Church in San Diego, though he described Trump’s relatively buttoned-down demeanor in front of the group as “very presidential.”

“I hope somebody can help him connect the dots,” Garlow said, that many debates surrounding the courts “all boil down to the homosexual or transgender issue.”

Perkins, of the Family Research Council, managed a work in a joke about the debate over transgender rights and a jab at Clinton in one swing. During a discussion about whether female voters would turn out in large numbers Clinton, Perkins said, “I was puzzled that somebody on the left would run with gender being their top issue — given that it could change.”

That drew laughter and applause from the room.

For many of those in attendance, the election boils down to a choice between Trump, whose track record causes them some heartburn, and Clinton, who they believe would continue the legacy of President Obama. And for many, that’s a non-starter.

“There’s no chance for me to vote for Hillary Clinton in November, so by default I will be voting for Trump. But my vote for Trump is insufficient. He needs me to get 10 more people to vote for Trump,” said former UN Ambassador Ken Blackwell.

Blackwell said he came away feeling like Trump needs to continue to “flesh out this relationship.” The big question, he said, is whether he will he spend his “political capital” getting other conservative Christians to vote.

At the beginning of the day, a speaker had prayed that “If there is to be a coronation today, let it be of Jesus as King.” It wasn’t quite that, but much of the slate of speakers and was made up of people friendly to Trump.

The moderator, Huckabee, has endorsed Trump. So has Ben Carson, the retired neurosurgeon and another former presidential candidate who had strong support from religious conservatives. He helped organize the event, and told the audience, “This election that is coming up is not about a person … It’s about America and what America represents.”

Carson told the crowd God is like a “Grandmaster” chess player, and seemed to compare Trump to a chess piece that’s usually considered the weakest one: “Sometimes he uses a pawn; sometimes he does things in a way that is not very apparent to us. And that’s where faith comes in.”

Moving to a fresh analogy, Carson argued the nation is going the wrong direction under the leadership of President Obama, and now is no time for conservative voters to be overly choosy.

The president angered many religious conservatives by endorsing same-sex marriage in 2013 and celebrating the Supreme Court rulings that have extended marriage rights to same-sex couples. The Obama administration has also been in legal battles with religious institutions that are fighting against the Affordable Care Act’s requirement that they provide coverage for contraceptives for employees. The Supreme Court punted on that issue last month.

Hillary Clinton has made preserving the Affordable Care Act and championing gay rights tenets of her campaign.

Franklin Graham, the son of evangelist Rev. Billy Graham, addressed Trump’s personal flaws that bother some evangelicals — including his multiple marriages, past support for abortion rights and foul language.

Graham pointed out that in lots of stories in the Bible, people messed up. After all, Graham told the crowd of devout Christians, the prophet Moses led his people out of slavery in Egypt but disobeyed God; King David committed adultery and murder; and the Apostle Peter, who, as one of Jesus’ closest followers really should have had his back, denied three times that he’d ever known Jesus.

“There is none of us that are perfect,” Graham said. “There’s no perfect person — there’s only one and that’s the Lord Jesus Christ, but he’s not running for president of the United States.”