Black children being told by classmates to sit in the back of school buses. Muslims called “terrorist” and told to go back to “your country with ISIS.” Swastikas drawn on a synagogue, schools, cars and driveways. A gay man being beaten by an assailant who said the “president says we can kill all you faggots now.” Plus “Trump Nation” and “Whites Only” spray-painted on a church attended largely by immigrants.

Those are some of the nearly 900 hate incidents across the U.S. in the 10 days immediately following President-elect Donald Trump’s surprise victory earlier this month, according to a new report from the Southern Poverty Law Center.

Blacks, immigrants, Jews, Muslims, LGBTQ people, women and other groups were all targeted, according to the report, which attributes this “outbreak” of hate to Trump’s win.

“Both the harassment since the election and the energy on the radical right are the predictable results of the campaign that Trump waged for the presidency — a campaign marked by incendiary racial statements, the stoking of white racial resentment, and attacks on so-called ‘political correctness,’” states the report, titled “Ten Days After.”

The SPLC, which tracks hate groups and hate crimes, documented 867 hate incidents using media reports and submissions to the #ReportHate page on its website.

The report does not include incidents of online harassment, and excluded incidents determined to be hoaxes by authorities. While the SPLC cautions it couldn’t “confirm the veracity of all reports,” it also states that hate incidents it documented “almost certainly represent a small fraction of the actual number of election-related hate incidents that have occurred since November 8.”

The report cites the Bureau of Justice Statistics estimate that two-thirds of hate crimes go unreported to law enforcement.

Nearly 40 percent of the hate incidents tracked in the 10 days after the election involved people explicitly invoking the president-elect’s name or his campaign slogans, which the SPLC says is a clear indicator that “the outbreak of hate stemmed in large part from his electoral success.”

In one incident in Arizona, a woman putting groceries in her car said two men in a pickup truck drove past her and yelled “Trump forever, you half-nigger slut bitch!”

“Can’t wait until your ‘marriage’ is overturned by a real president. Gay families = burn in hell. #Trump2016,” read a note received by a gay couple in North Carolina.

The SPLC did not track incidents of hate and harassment in the same way before the election, so the number can’t be directly compared to an earlier period or solely attributed to Trump’s win. Trump himself put some of the blame on the media for amplifying the stories of attacks after the election.

The number of reported incidents dropped significantly after a huge number in the first three days after the election.

Mark Potok, SPLC senior fellow, said the rash of hate incidents are directly related to the election, and echo a similar, though smaller number of anti-black incidents the SPLC noticed following President Barack Obama’s win in 2008. The difference now, Potok said, is that the latest incidents are “celebratory violence by Trump supporters.”

The SPLC report also underscores that many of the people who were targeted for their gender, orientation or ethnicity said the recent incidents were either their first experience with harassment or took it to a new extreme.

An Asian-American woman who was told to “go home” when she left a train station in Oakland, California, wrote that she had experienced discrimination before, “but never in such a public and unashamed manner.”

Hate incidents are occurring almost everywhere in the country.

Hate incidents were reported in all but four states: Hawaii, Wyoming, North Dakota and South Dakota. Larger states tended to have a higher number of incidents, and three states ― California, New York and Texas ― accounted for more than a quarter of all the reports.

Immigrants have been the most frequent targets for post-election hate.

About one-third of the incidents, 280 total, were motivated by anti-immigration sentiments, according to the SPLC report.

Trump stoked immigration fears starting with his first campaign speech, when he referred to Mexican immigrants as rapists and criminals. He energized his supporters with his promise to build a wall on the U.S.-Mexico border, and has pledged to deport millions of undocumented immigrants once he is in office.

It’s not clear if Trump can and will deliver on his promises, but they’re being used to harass immigrants, particularly Latinos, and often at schools, the report notes:

Students and young people have absorbed divisive campaign rhetoric and are using it to taunt and harass their classmates, with chants of “Build the wall!” making their way into school cafeterias, hallways, and buses. In Colorado Springs, Colorado, 8th grade students told Latino students on the school bus, “Not only should Trump build a wall, but it should be electrocuted (sic) and Mexicans should have to wear shock collars.” In Redding, California, students brought “deportation letters” to school for their Latino classmates.

People of other ethnicities have also been targeted, according to the SPLC. In one incident, a Florida teacher reportedly threatened her black students with forced removal from the country, saying, “Don’t make me call Donald Trump to get you sent back to Africa.”

Other minorities, including groups Trump targeted during his campaign, have also suffered from hate incidents.

Trump is a racist who refused to condemn white supremacists campaigning for him. He once bragged about sexually assaulting women. He tweeted an anti-semitic image. He’s repeatedly disparaged Muslims. And though he’s said he supports LGBT rights, his vice president and other members of his administration have repeatedly pushed anti-gay laws.

Similarly, the incidents tracked by the SPLC show hate directed at nearly every minority group.

Close to one-quarter of the hate incidents tracked by the SPLC in the report were categorized as anti-black, and there were also a large number of anti-LGBT and anti-Semitic incidents.

There were 49 anti-Muslim incidents and 40 anti-women incidents, including several that echoed Trump’s own misogynistic comments.

Children and young people were responsible for many of the hateful messages.

About 320 of the incidents occurred at universities and K-12 schools, which the report authors say is unsurprising, “given how prevalent bullying is in our nation’s schools and the characteristics of young people.”

Teachers have shared concerns that Trump’s win will open the door to more bullying in their classrooms. For a separate report on how the election has affected schools, SPLC conducted an online survey of 10,000 educators. More than 2,500 said they knew of incidents of bigotry, harassment and physical fights directly related to election rhetoric. 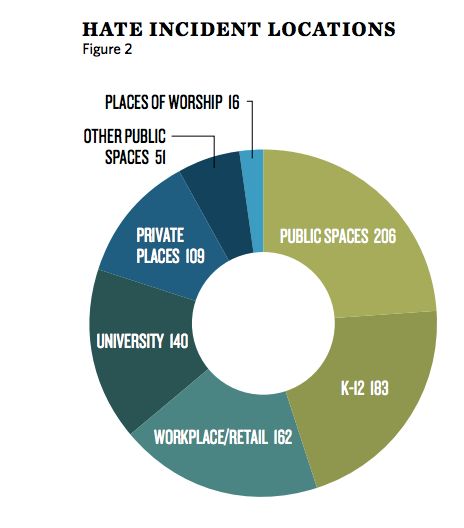 Public spaces were also common locations for hate incidents, the SPLC found, particularly in stores and on the street. The report shares several anecdotes from retail and service workers who were harassed by customers:

When an 18-year old service employee in Kalamazoo, Michigan, asked a man if he needed help, he replied, “I don’t need to ask you for shit. Donald Trump is president.” He then called her a “black bitch” and spat on her shoes. A cashier in Minnesota and a hostess in Illinois were both called “nigger” by their customers.

A number of the incidents supported white nationalist views, adding to fears that Trump’s election has emboldened white supremacists.

Trump’s presidential campaign was widely supported by the white nationalist or white supremacist movement in the U.S. According to the SPLC, “the language, literature, and symbols of white nationalism have cropped up throughout the country” in the days since Trump’s electoral win.

White nationalist fliers were found at “businesses, public parks, on people’s cars, in driveways, and, especially, on college campuses around the country,” the report states.

“Are you sick of anti-white propaganda in college? YOU ARE NOT ALONE,” read one flier on a college campus. “RACE IS REAL. Your professors are lying to you to keep their jobs.”

There were also reports of KKK recruiting literature being distributed across the country.

Trump selected Steve Bannon as his chief strategist in the White House. Bannon is the former executive chairman of Breitbart News ― a site that regularly airs white nationalist viewpoints.

A small number of incidents were apparently motivated by hate for Trump himself.

Twenty-three of the 867 hate incidents, or less than three percent, were directed at actual or perceived Trump supporters.

In Chicago, a reported traffic altercation led to a white man being assaulted by black teenagers who shouted, “It’s one of them white boy Trump guys!” In Denver, the word “No” was written on the Trump campaign’s headquarters. And in New York, a man wearing a Trump hat on the subway was reportedly grabbed around the neck.

The SPLC report comes amid other reports of rising hate in America.

According to the latest FBI statistics, there was a nearly 7 percent rise in hate crimes in 2015, an uptick driven largely by a surge in anti-Muslim hate crimes.

The Huffington Post has documented over 300 instances of anti-Muslim violence, vandalism, discrimination and political speech in 2016. There have been 13 stories of apparent Trump supporters attacking, harassing or plotting to kill Muslims.

In a “60 Minutes” interview earlier this month, Trump claimed he wasn’t aware of all the hate incidents following his victory.

“Mr. Trump claims he’s surprised his election has unleashed a barrage of hate across the country,” SPLC President Richard Cohen said in a statement Tuesday. “But he shouldn’t be. It’s the predictable result of the campaign he waged. Rather than feign surprise, Mr. Trump should take responsibility for what’s occurring, forcefully reject hate and bigotry, reach out to the communities he’s injured, and follow his words with actions to heal the wounds his words have opened.”

The Trump administration did not respond to a request for comment on the SPLC report Tuesday.

Have you been a victim of an act of harassment or discrimination? If so, we encourage you to report the incident to local authorities, and to send us an email about it at: trackinghate@huffingtonpost.com.