A 15-year-old programmer named Saleem Rashid discovered a flaw in the popular Ledger hardware wallet that allowed hackers to grab secret PINs before or after the device was shipped. The holes, which Rashid described on his blog, allowed for both a “supply chain attack” – meaning a hack that could compromise the device before it was shipped to the customer – and another attack that could allow a hacker to steal private keys after the device was initialized.

Rashid is not affiliated directly with any competitors although it appears some suggestions the this work on Trezor and other hardware wallets could have tainted his findings. His response:

The Ledger team described the vulnerabilities dangerous but avoidable. For the “supply chain attack,” they wrote: “by having physical access to the device before generation of the seed, an attacker could fool the device by injecting his seed instead of generating a new one. The most likely scenario would be a scam operation from a shady reseller.”

“If you bought your device from a different channel, if this is a second hand device, or if you are unsure, then you could be victim of an elaborate scam. However, as no demonstration of the attack in the real has been shown, it is very unlikely. In both cases, a successful firmware update is the proof that your device has never been compromised,” wrote the team.

Further, the post-purchase hack “can be achieved only by having physical access to the device, knowing your PIN code and installing a rogue unsigned application. This rogue app could break isolation between apps and access sensitive data managed by specific apps such as GPG, U2F or Neo.”

Ledger CEO Eric Larchevêque claimed that there were no reports of the vulnerability effecting any active devices.

“No one was comprimised that we know of,” he said. “We have no knowledge that any device was affected.”

Rashid, for his part, was disappointed with the speed Ledger responded to his claims. He wrote on Twitter: 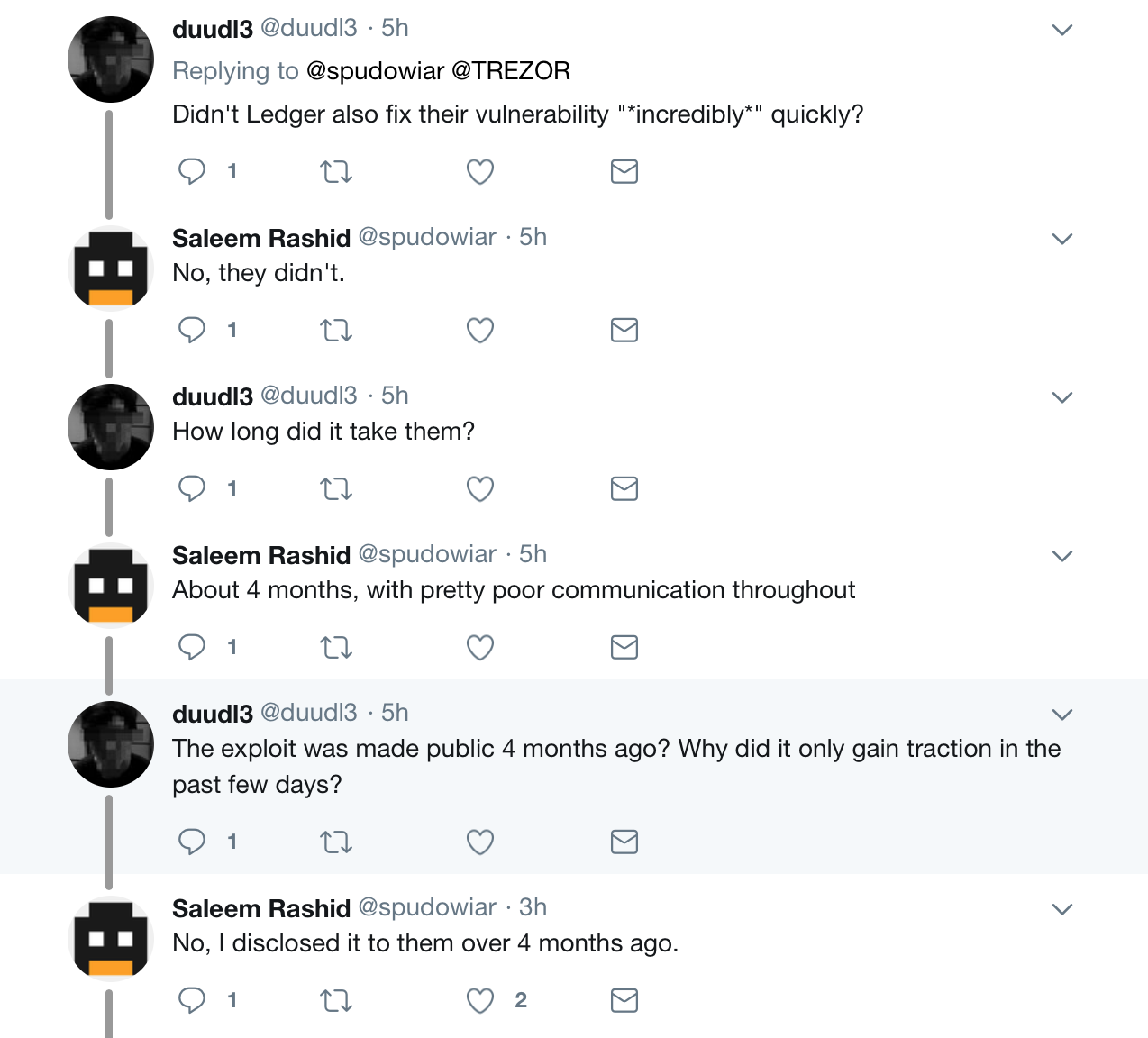 “We were in contact with Saleem for the last four months,” Larchevêque said. “It is incorrect to state that we did not reply to him or do anything. There were other vulnerabilities that came along at the same time and it was a complex vuln that was deep in the architecture of our system.”

“All systems have vulnerabilities,” said Larchevêque. “That’s part of the life of any security system. It’s a game of cat and mouse.”

Wallet maker Trezor has also announced an update for their hardware to verify the integrity of their devices.

Ultimately, this breach shows us that hardware wallets are a good solution but still not foolproof. Regular updates and careful key management are still vitally important.