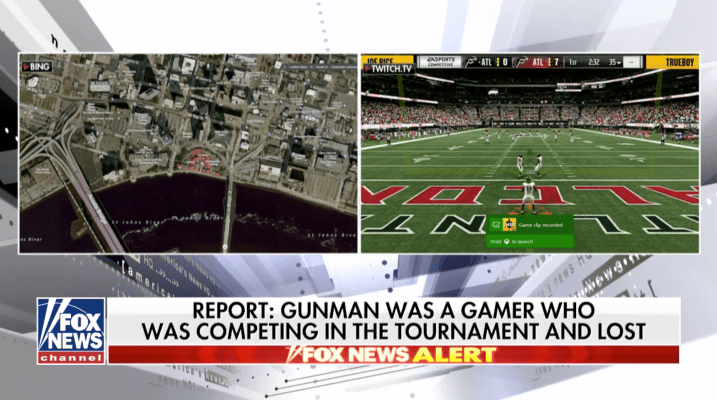 At least eleven people have been shot and four people were killed in a mass shooting attack at a livestream event debuting the new “Madden NFL 19” game at an arcade in Jacksonville, Fla., according to local news reports.

The Jacksonville Sheriff’s office confirmed on Twitter that one suspect was dead at the scene and the police were still investigating.

“We just finished clearing The Landing of potential witnesses and victims there,” said Sheriff Mike Williams in a statement broadcast on Facebook Live. “We have no outstanding suspects,” Williams said. “We have one suspect in this case. He is deceased at the scene.”

According to a report in The Los Angeles Times, the shooter was a player who had lost during the competition and then shot other attendees at the event before killing himself.

The event was live-streamed on Twitch and there are multiple audio streams that broadcast the sounds of the shooting live.

Multiple participants in the event took to Twitter to describe the scene.

Me and my gf are ok everyone and out of the Jville area. This is absolutely sickening. Please pray for the madden players right now injured during the shooting. Shit like this really makes you rethink your actions and the way you live. For sure gunna be some changes going forward

The sheriff’s office confirmed via tweet that there witnesses to the shooting were hiding in locked areas in the shopping area where the event — and shooting — occurred.

We are finding many people hiding in locked areas at The Landing. We ask you to stay calm, stay where you are hiding. SWAT is doing a methodical search inside The Landing. We will get to you. Please don’t come running out. #TheLandingMassShooting https://t.co/qBJvkaO7xT

“This is a horrible situation and our deepest sympathies go out to all involved,” said Electronic Arts in a statement about the shooting.

This is a horrible situation, and our deepest sympathies go out to all involved.

In a direct message to The Los Angeles Times, one witness, Steven “Steveyj” Javaruski, said that the gunman had targeted “a few” people  and shot at least five before shooting himself.

The event was a Madden tournament with about 250 people in attendance. It was intended to be a competition that would select attendees for a final tournament in Las Vegas.

This story will be updated with additional information