Released in 2014, the year before Snapchat put face filters on the road to ubiquity, Perfect Corp’s YouCam Makeup app gave many smartphone users their first taste of augmented selfies. At the beginning, it let users experiment with different makeup looks and portrait-editing tools. Since then, YouCam Makeup has expanded beyond selfies into e-commerce and retail with tools for over 200 beauty brands and retailers, including L’Oréal, Estée Lauder, Cosmopolitan, and Target (the big-box retailer’s online Virtual Try-on tool uses Perfect Corp.’s technology).

At CES this week, Perfect Corp announced a new roster of products under the brand name Beauty 3.0, including AI-based augmented reality tools that recommend foundation, makeup, and hair with a solid rate of accuracy and realism (I tested several of the new apps last month at Perfect Corp’s Taipei headquarters), even for finishes like glitter and metallics. It also recently signed a partnership with Ulta to bring its try-on technology to the retailer’s beauty stores and hair salons. 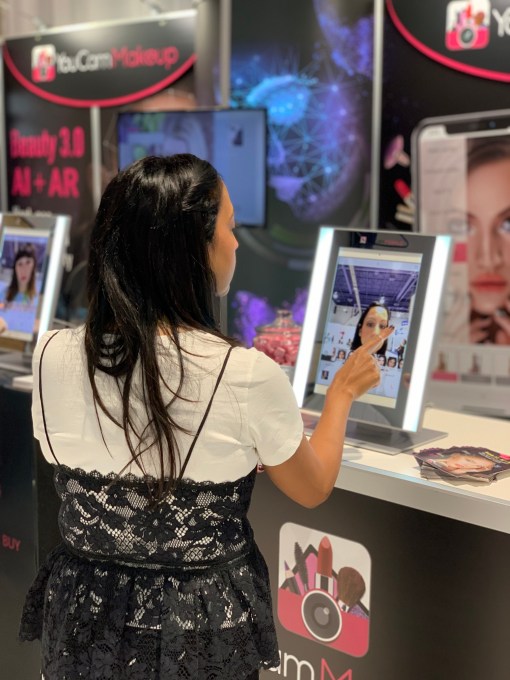 Launched in 2014 by CEO Alice Chang and owned by CyberLink, a digital media software developer, Perfect Corp says its apps have now been downloaded 700 million times and claims a total of 60 million monthly active users (in China, it also has a mini-program for WeChat). The company says its tools help retailers increase basket sizes and conversions, reduce the number of products returned, and give brands aggregated data about how consumers interact with makeup colors, like what shades they are most likely to try-on and how they combine different products.

Perfect Corp recently began working on 3D models, so users can see how a virtual makeup or hairstyle will look on them from different angles as they move their heads (for example, hair color, even ombré styles, look realistic even if you flip your hair). Four years on the market and a global user base have enabled YouCam to train its algorithms for a wide range of face shapes and skintones—an important advantage as consumers demand and expect more diversity from beauty brands.

Chang says one thing that sets Perfect Corp’s makeup try-on app is its ability to adjust different colors so users have a more accurate idea of how it will appear on their skin, instead of simply applying the same color to everyone (Chang describes that as “sticker effect”). Most of the company’s technology is developed in-house by Perfect Corp and CyberLink. YouCam Makeup app grew out of CyberLink’s video technology, including 3D high-definition video, face recognition, and augmented reality, created for desktop software called Media Show. Limited to PCs, Media Show did not become successful, but as smartphones (and selfies) began to gain traction and run on increasingly powerful processors, Chang decided to use its tech in YouCam Makeup.

“We are not a beauty company,” she says “But we know how to use technology to help beauty consumers solve their pain points.”