Subscriptions are booming on the app stores, and particularly subscription video apps thanks to the growing number of cord cutters who are choosing to stream their TV shows and movies, instead of paying for cable or satellite. In the U.S., the top 10 subscription video apps by revenue pulled in $1.27 billion in 2018 across both the iOS App Store and Google Play, according to new data from Sensor Tower – that’s a 62 percent increase over the $781 million spent in 2017.

It’s also three times higher than what was spent in these apps back in 2016.

The top app, not surprisingly, was Netflix – which snagged the spot for the second year in a row. It earned an estimated $529 million in the U.S., the report found. However, Netflix won’t maintain the top spot in the rankings in 2019, as the company recently made a decision to keep more of its subscription revenue to itself. 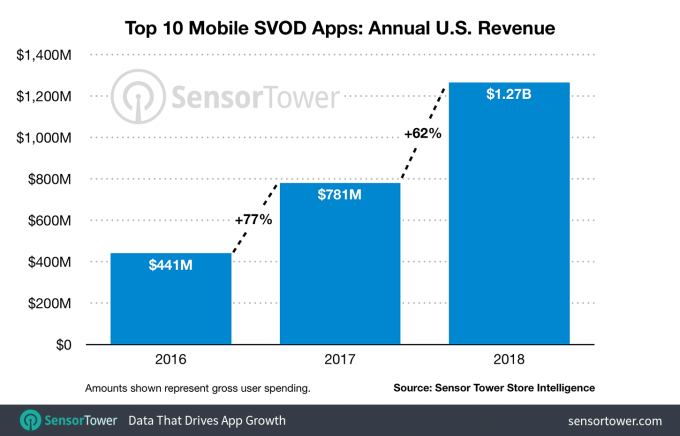 Netflix in 2018 had dropped in-app subscription sign-ups in its Android app on Google Play, then did the same on the iOS App Store in December. That will decrease its in-app subscription revenues this year, though it won’t immediately to zero because of revenues from existing subscribers.

The No. 2 top grossing app was YouTube, which is maybe more of a surprise to those who don’t realize that the app they use to watch free videos is making quite so much money through in-app purchases. But YouTube offers a couple different types of in-app purchases, including subscriptions to its ad-free tier, YouTube Premium, as well as virtual currency to be used in Super Chat. 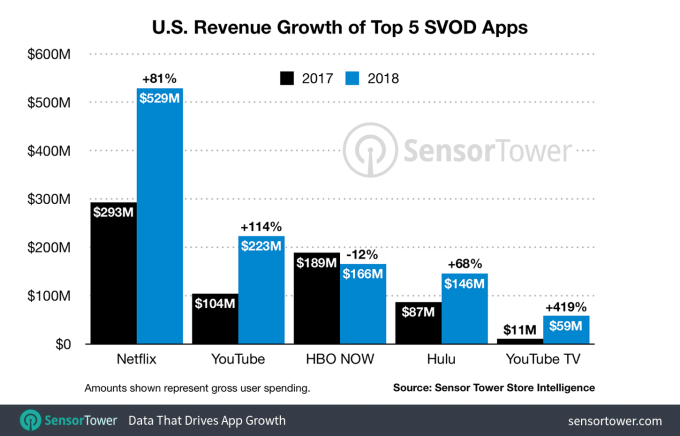 HBO NOW was the No. 3 top grossing app, even though its subscriber base declined. The app generated 12 percent less in 2018 at $166 million, down from $189 million. The reason, naturally, was that the app was without “Game of Thrones” to attract viewers. That doesn’t bode all that well for HBO’s future without “Thrones,” unless its spin-off becomes a hit.

Hulu and YouTube TV were the No. 4 and No. 5, apps respectively. Hulu grew by 68 percent while YouTube TV jumped up a whopping 419 percent. CBS’s streaming app is doing decently, too, with 57 percent year-over-year growth in subscriber spending.

Much of that comes from streamers interest in the new “Star Trek” series. In fact, with the Season 2 premiere this month, CBS said its streaming service hit a new milestone across both subscription sign-ups and unique viewers in a weekend. While the network didn’t share exact numbers, it said the January ’19 weekend when the new season of “Star Trek:Discovery” aired eclipsed 2017’s previous record from the series premiere by over 72 percent, in terms of sign-ups. 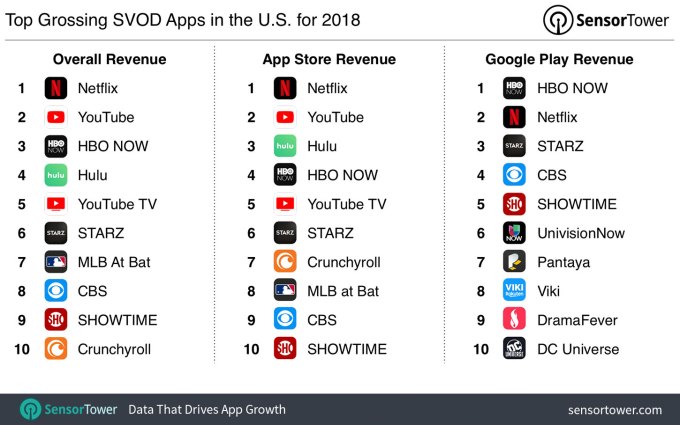 Combined, 2018’s top 10 subscription streaming apps accounted for a sizable chunk – now 22 percent – of non-game app revenue on the app stores in the U.S. Their 62 percent revenue growth was also more than all the other non-game apps combined, which grew 56 percent year-over-year, the new report said.

Subscriptions – and not just for streaming apps – have become the new driver for non-game spending on the app stores, and that isn’t going to change anytime soon.

According to App Annie’s recent forecast for 2019, 10 minutes of every hour spent consuming media across TV and internet will come from streaming video on mobile. It estimates that total time in video streaming apps will increase 110 percent from 2016 to 2019, with consumer spend in entertainment apps rising by 520 percent over that same period. Most of those revenues will come from the growth in in-app subscriptions, the firm had said earlier.