Last month, Viacom picked up free streaming service Pluto TV for $340 million in cash. This week, the company spoke in more detail about its plans for Pluto TV – including its potential to for ad-supported streaming as well as the ability to market Viacom’s various subscription video properties directly to consumers, similar to how Amazon Channels works today.

At the time of the acquisition, Pluto TV offered over 100 channels of free content from 130 partners, and reached 12 million monthly users – many of whom are younger, and never intend to subscribe to traditional pay TV, like cable or satellite.

While Pluto TV built its brand on offering access “free TV,” Viacom sees the service not only as a way to grow an ad-supported video business, but also a way to upsell those free customers to paid subscription video products.

Viacom isn’t the only brand to have realized in recent months that a good number of consumers are uninterested in paying for TV and movies, when there are so many free alternatives for entertainment available on today’s web – including most notably, YouTube’s massive ad-supported video network, and to a lesser extent, the video offerings from places like Facebook Watch, and even those from social apps like Instagram and Snapchat.

That’s led many in the industry to launch their own, free and ad-supported video destinations. This includes Amazon’s recent debut of IMDb’s Freedive; Roku’s free TV and movie app known as The Roku Channel; Sling TV’s teaser package of free content for non-subscribers; and Walmart’s now over two-year old Vudu “Movies On Us;” among others. Plex also recently said it will venture into this area in 2019.

Viacom believes Pluto TV will give it a leg up in this growing ad-supported video market, explained Viacom CEO Robert Bakish, in a call with investors. 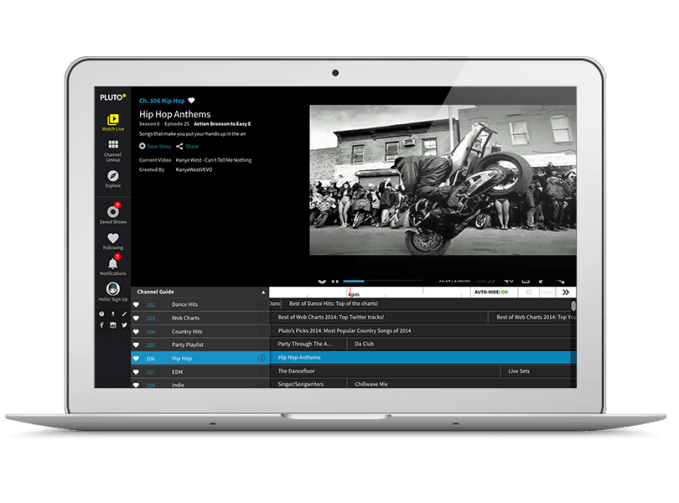 “We believe the majority of the Pluto TV audience is not watching pay-TV today. This segment already exists, so it makes sense for us – as Viacom – to take share,” he said. “Given the segmenting of the market, distributors need a free TV offering.”

The idea is that the free TV offered by Pluto TV will continue to attract consumers to the service. And Pluto TV will become more attractive on this front as Viacom adds its own content to the service – including all the programming it has been holding back from other subscription video-on-demand (SVOD) services over the years.

“Our strategic decision to curtail large-scale library licensing to the SVOD players over the last couple of years – it cost us some money in fiscal 2017 and 2018 – but it means that we have large volumes of content to bring to bear now once we close the Pluto transaction,” Bakish noted.

In particular, the content Viacom plans to bring to Pluto TV spans genres like “kids, African-American, reality and comedy,” the company said.

Pluto TV will also gain access to Viacom’s marketing capabilities to grow its audience and its infrastructure, allowing the service to expand globally.

Meanwhile, Pluto TV offers advertisers an attractive audience, as it’s capable of reaching younger viewers who are opting out of pay TV, Viacom believes. Half of Pluto’s users today are ages 18 to 34, and the majority watch the service’s content on their TV’s big screen, thanks to Pluto’s integrations with smart TVs like those from Samsung and Vizio.

“It will provide a rapidly growing source of billions of monthly advanced TV impressions in young and hard-to-reach demos in a premium and safe environment,” said Bakish.

By noting that Pluto TV content would be “safe,” Bakish is taking a pointed dig at YouTube, which has struggled to police its user-gen content in a way that made it safe for advertisers, which even resulted in a brand freeze over ads in 2017. This is still a big concern for YouTube, CEO Susan Wojcicki said this week a letter to the YouTube community.

Last year, YouTube saw “how the bad actions of a few individuals can negatively impact the entire creator ecosystem,” wrote Wojcicki. “And that’s why we put even more focus on responsible growth,” she added.

In addition to the poor taste in programming choices made by various creators, at times, YouTube and more recently Roku, have also had to weigh decisions about how much extremist content they want to host in the name of being an open platform. The risk that comes with that is a significant impact to their bottom line as advertisers flee, the companies have found.

In addition to free streaming, Viacom plans to use Pluto TV to grow its paid subscriber base, as well.

Through Pluto TV, Viacom will offer customers the chance to add on paid subscriptions to their account, Bakish said – a strategy employed today by Amazon and Roku.

These add-ons will include those for Viacom’s subscription products like Noggin, aimed at parents of preschoolers; Comedy Central Now; and the company’s newest subscription, NickHits, the CEO said. (The latter targets older kids and recently arrived on Amazon Channels.)

Viacom said the Pluto TV deal would boost revenue in 2019, but will be “slightly dilutive” to earnings. Viacom experts the deal to close in March.

The company reported a mixed quarter, with revenue of $3.09 billion that fell short of Wall Street forecasts, an earnings per share at $1.12 which beat analyst expectations.